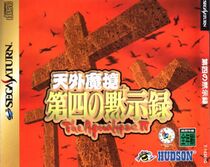 Far East of Eden: The Fourth Apocalypse (Tengai Makyō: Daiyon no Mokushiroku) is the eighth game in the Far East of Eden series, first released exclusively in Japan in January 1997 on the Sega Saturn. Unlike previous installments in the series, which take place in a fictional version of Japan named "Jipang", the game takes place in a fictionalized and anachronized version of 1890's America.

In Arizona, people have been cursed to gain weight by a villain named "D", for "debu" ("fat" in Japanese).