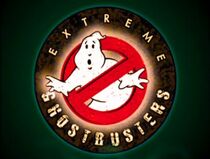 Extreme Ghostbusters - a 1997 continuation/reboot of the cartoon "The Real Ghostbusters". It recieved mixed opinions from fans, with people praising the more adult, darker stories but criticizing weak characters and the introduced later in the series excuse, that capturing a ghost resets every bad thing it did.

A cat-like ghost makes people overeat so it can harvest power from them the more they eat. So he does to Slimer. While Slimer and humans don't get even slightly fatter, the ghost does with each energy harvest. At the end, Slimer forcefeeds him the energy, making him explode.