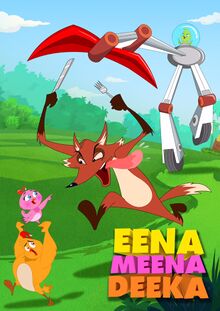 Eena Meena Deeka is an Indian Flash animated series that has been airing on Hungama TV since 2015. It involves the slapstick-based hijinks of a ravenous fox who tries unsuccessfully to eat a trio of young chicks.

In order to save himself from falling into the chicks' helicopter blades, Foxie inflates himself, only to get popped in the end.

Foxie is tricked by one of the chicks, who makes him eat many coconuts. Later, another one gets him rolling on the desert.

Foxie's attempt to stop the chicks results in landing face-first onto their train's chimney. They then inflate him with smoke.

Foxie gets stuck in one of the chicks' organ pipes. So, one of them plays music with the organ, causing Foxie to become bloated with music.

Foxie is tricked into drinking blended grenades he attempted to blow up the chicks with, which explodes inside him.

Foxie tries to sneak into the chick's house through the chimney, but Meena uses a hairdryer to send him flying out, also inflating him in the process.

Foxie is tricked by Eena, Meena and Deeka into thinking that a giant egg (actually a dinosaur egg) will hatch a bigger chicken for him to eat. He even goes so far as to inhale a lot of air to make it hatch.

Foxie disguises himself a ghost with a sheet and vacuum cleaner to suck up the chicks, but Eena hooks up the vacuum's tube to Foxie, who ends up swollen from sucking up various things until it shorts out.

Deeka halts Foxie's attempt to shoot the chicks with golf balls by bending the tube so they can be fired into him through his mouth.

Foxie is drinking from a coconut and ends up sucking the oceans dry due to a prank by the chicks.

Foxie uses an air pump to inflate himself and blow the cloud out from in front of the Sun after one of the chicks staples it.

Foxie angers a horde of frogs with the giant egg in tow. Eena pumps up the frog from earlier which uses its size to retaliate against Foxie.

After Foxie's failed attempt to catch up with the chicks on flying horses, he bloats up from loads of fish entering his mouth trying to get back on his flying horse.

Foxie enters the sewer's diner where the chicks are hiding and they have him eat the entire food supply, angering the owner when he's unable to pay off the massive bill.

Eena and Deeka fill Foxie with paint balloons and Meena (who was captured moments before) pops him with her beak.

During a fight, Deeka throws boxes of dairy at Foxie. In the process, he briefly gets bloated and consumes more in order to get stronger.

The chicks give Foxie a bottle of lemonade but Deeka attaches a pump to the bottle and inflates him.

The chicks figure out Foxie's attempt to prank them with the soda bottle his professor uncle had poisoned, so they force him to drink it which results in two explosions inside him.

Eena plugs the pungi with earplugs and Foxie inflates as a result.

Foxie (on puppet strings due to a failed prank) eats the tomatoes the angry crowd throws at him and gets stuffed.

A failed attempt to ambush the kids leads to Foxie inadvertently swallowing a pump which inflates him.

While infused with the alien's DNA and able to stretch, Foxie manages to stop himself from crashing into planets by inflating himself and bouncing off them like a pinball.

Later on, he inflates himself again to save himself from falling but the alien and chicks trap him in a nearby well.

Foxie drinks up the water supply for the chicks' greenhouse but gets punctured when he falls on a plant and becomes the new sprinkler.

Foxie, having gained the ability to shape-shift from drinking a potion the chicks made, turns into a vacuum to suck them up but Deeka conjures water so that when he sucks it up, he's bloated when he shape-shifts again.