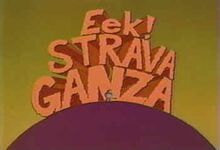 Eek! The Cat (later retitled Eek! Stravaganza) is an animated series created by Savage Steve Holland and Bill Kopp. It ran from 1992 to 1997. It is about a purple cat named Eek, who has the motto "it never hurts to help." He often gets into trouble because of his selfless attitude. The show also added two more segments: The Terrible Thunderlizards in season 2, and Klutter! in season 4.

A Polar Bear vores Eek then later on it shows up with a big belly when it got inside the building.

Elmo's little brother Timmy has a disease that is making him run out of gravity. When we see him later in the episode, Timmy has gotten worse and has inflated so much race commenters are using him as a blimp.