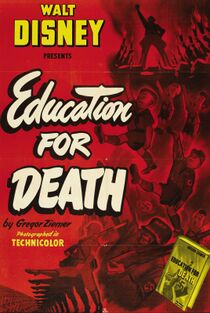 Education for Death is an infamous 1943 World War II propaganda movie produced by Disney, that focuses on showing a heavily propagandised version of Hitlerjugend.

During one of the Hitlerjugend lessons, the fox that is supposed to represent Germany swallows a rabbit that represents weak countries.

The Mein Kampf fox would later be developed into the Foxy Loxy character in the Silly Symphonies short, Chicken Little.