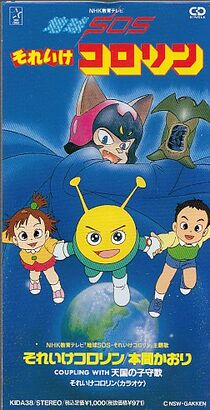 Earth SOS: Sorry, Kororin (Japanese: 地球SOS それいけコロリン) is an educational TV series that was broadcasted by NHK from April 8, 1992 to March 10, 1993.[1] The show deals with environmental problems such as garbage management, water pollution and desertification. Instead of simply educating, the show encourages viewers to take action and help the environment. This is done with a combination of live-action and animation segments.

The animated segments tell the story of Kororin, a yellow-headed alien who arrived on Earth from Planet Oasis. Kororin befriends the Eko family and uses his ESP to teach Taro Eko and Ozone Eko about the environment. Kororin is not alone, however. His nemesis, Syndrome Kiyoshi, is trying to destroy polluted planets like Earth. To achieve this Syndrome collects the selfish energy of humans with his Ego Counter. When the Ego Counter is full, an enormous kaiju appears which must be defeated by Kororin and his friends.

An English translation of the show does not exist so the information above may be inaccurate.