Dropkick on My Devil! 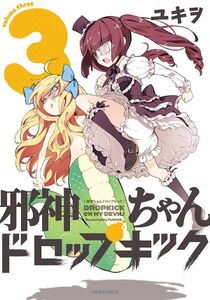 An adaptation of Yukiwo's manga focusing on the witch Yurine Hanazono and Jashin, a demonic naga she summoned from hell and the various other supernatural entities that enter their day-to-day lives.

Jashin binges on strawberry juice after being dumped by her partner Medusa, leading to an all-too-brief epiphany that she's been taking her (and her financial support) for granted.

Pekora refuses to accept Yurine's generosity by enjoying the lunch she gave her which led to Jashin eating it for her.

Season 2 (Dropkick On My Devil!! Dash)[edit]

Jashin fills up on a bargain bowl of curry