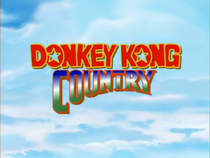 Donkey Kong Country is a French/Canadian animated series based on the video game series of the same name. It aired on television between 1996 and 2000. The show follows Donkey Kong, who is the future ruler of Kongo Bongo due to finding the magical Crystal Coconut. Until the day he becomes the island's ruler, he must protect the Crystal Coconut from King K. Rool and his minions, who try to use its power to rule the island.

Donkey Kong loses his strength after Candy Clone curses him while cutting his hair. He tries eating bananas to restore his strength, but it doesn't work. He does return to normal after eating a banana grown from Cranky's antidote.