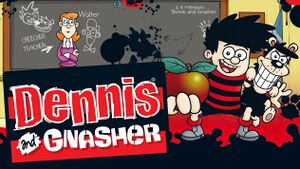 Dennis the Menace and Gnasher is an Australian and British animated cartoon series and one of many TV shows based off the Beano comic series, with this adaptation running from September 2009 to December 2013 on CBBC. Much like its predecessors, the show focuses on the titular young boy, Dennis, and his dog, Gnasher from the comic series and their various grade-school hijinks together, however this adaptation is more aimed toward younger audiences with a significant decrease in Dennis’ characteristically rambunctious behavior.

To increase his odds of winning a football game against Dennis’ team, Walter fattens up Gnasher with an abundance of sausages from the butcher shop.