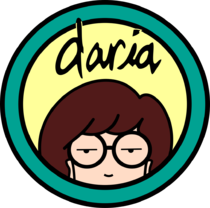 Daria is a 1997 MTV animated series. A spin-off of Beavis and Butthead, the series revolved around sarcastic, cynical teen Daria Morgandorfer and her navigation of often shallow high school life.

Over the credits of each episode, alternate versions of the characters are depicted. One such version was an overweight Tiffany.