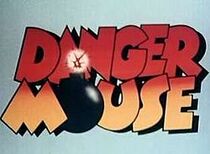 Danger Mouse is a British cartoon series created by Brian Cosgrove and Mark Hall that originally ran from September 1981 to March 1992. A highly successful series during its run, a minor character was spun off into his own series, Count Duckula, and a reboot is in development for 2015 with more visible female characters, due to a lack of any in the original show as a whole.

A parody of fictional spies like Danger Dan, it features Danger Mouse, an English mouse who works as a secret agent alongside his sidekick Penfold to thwart the plans of the evil frog Baron Silas Greenback.

The Custard Mite of Glut will eat any custard he sees, but does not look any different except when the whole land is flooded in custard.