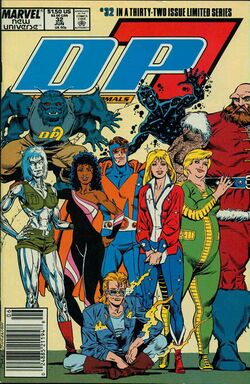 The Displaced Paranormals, D.P.7 for short, is a team of Marvel New Universe superheroes who gained their superpowers from the White Event. They appeared from 1986 to 1989, but have made a couple of special appearances ever since.

One of the team's special members is Merriam Sorenson, who goes by the alias "Sponge", with the power to absorb moisture into her body, resulting in a hefty apppearance, and turn it into water when released. When she felt she was gaining too much weight from it all, she was rid of her powers thanks to a paranormal known as the Cure.