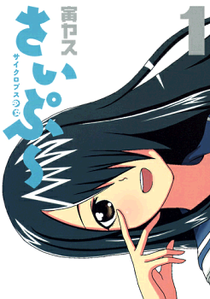 Cyclops Shoujo Saipu is a four-panel manga created by Yasu Tora. It was made into an original net animation in 2013. Fuuka Saito, nicknamed "Saipu," once made a promise to marry her older brother Hikaru. Now she is 14-years-old, tall, and well-endowed, and still intends to marry him. Hikaru is usually freaked out by her advances.

Saipu and Hikaru get full stomachs after eating watermelon, which makes Saipu think about having a baby.