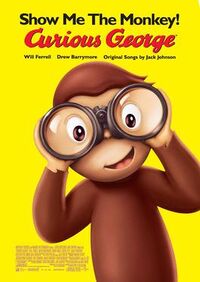 Curious George is an American animated film produced by Universal Feature Animation based on the children's book series of the same name created by H.A. Rey and Margret Rey. The film was theatrically released in February 2006. Integrating and combining many stories from the books, the movie follows George, a very curious and playful monkey who winds up causing trouble for a man dressed in a yellow hat named Ted. Ted works at a museum that has fallen on hard times and is in danger of closing down, and while searching for an ancient artifact in an African jungle to boost the museum's popularity, he crosses paths with George who eventually stows away on the boat back to the city with him. George's curiosity soon leads him into various situations that often lead Ted into even more trouble.

While on the boat back to the city, George ends up finding the ship's vast cargo of fruit and enjoys as much as he can eat.