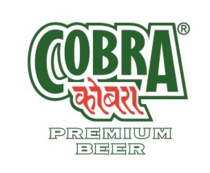 Cobra Beer is a brand of beer introduced in 1989 and manufactured in the United Kingdom, Ireland and India. In 2008, a trilogy of animated ads was released in UK cinemas, illustrated by Simon Spilsbury and animated by 12Foot6, in which three friends have an ad-libbed conversation in a pub that is visualised around them, while people who do not drink Cobra Beer like they do bloat up like balloons; this is because Cobra is less gassy than regular beers.