Cloudy with a Chance of Meatballs (TV series) 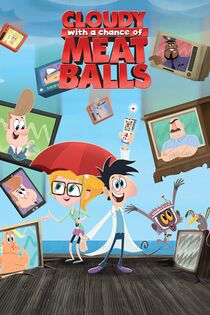 Cloudy with a Chance of Meatballs (also called Cloudy: The Series) is a spin-off television series of the film of the same name, having premiered in 2017. It acts as a prequel, featuring Flint Lockwood and Sam Sparks in their high school years in Swallow Falls, as well as the other characters from the film.

Flint's toot-inducing invention gets out of control and threatens to make him release one strong enough to destroy the town. Fortunately, Sam gets him to the ocean to do it there.

Flint clones a ton of bananas, which Steve eats. At the end of the episode, Steve also eats Clint who is falling off the roof.

Hector traps Flint inside a giant gelatin, but Sam and Steve eat it to free him.