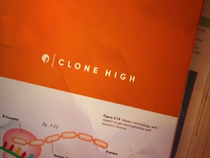 Clone High is an animated adult sitcom series on MTV created by Phil Lord, Christopher Miller and Bill Lawrence, two of which would later move on to directing feature films starting with Cloudy With a Chance of Meatballs. The series revolves around five teenage students in a high school for clones of historical figures run by a government office as a military experiment.

Despite a short 13-episode run on MTV from November 2002 to February 2003, and mass controversy for its portrayl of Mohandas Karamchand Gandhi, it has earned a strong cult following. It is the second adult animated sitcom co-distributed by Touchstone Television, the first being Clerks: The Animated Series.

Gandhi appears to be turning blue and gaining weight from X-Stream Blu, but nobody seems to mention this until he passes out and Abe reveals the ingredients to be pancake batter and blue paint.