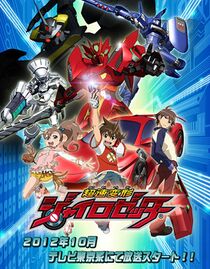 Chō Soku Henkei Gyrozetter is an anime series based on the Square Enix video game of the same name that ran from early October 2012 to late September 2013. The main character is Kakeru Todoroki, a fifth grader chosen to control an A.I. Car, one of many artificially intelligent cars built for maximum safety, only to find out that his car is a transforming robot named Gyrozetter.

Kakeru and Michie have a curry-eating contest that ends with a draw.