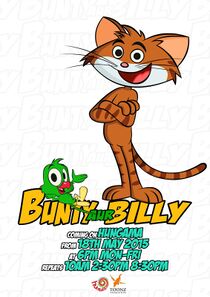 Cat & Keet (also known as Bunty and Billy or Billy & Birdy) is an Indian animated series about a cat and a parakeet/parrot who are always fighting. They are joined by a donkey named Dunks.

Cat inflates himself with helium in order to chase after Keet, who get some crows to deflate Cat.