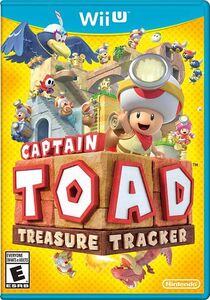 Captain Toad: Treasure Tracker is a puzzle platformer game made by Nintendo for the Wii U. It is a spin-off of the Mario games and builds on the minigame from Super Mario 3D World. The main character is Captain Toad, leader of the Toad Brigade first seen in Super Mario Galaxy. The game received an updated port for the Nintendo 3DS and Nintendo Switch in 2018.

As Captain Toad and Toadette go adventuring, they find a Power Star. However, a giant bird called Wingo snatches it, and Toadette also when she tries to stop him. Captain Toad must travel the land to find Wingo and rescue Toadette, while collecting treasure along the way.

When Captain Toad fights Wingo, he has to hit him with a giant turnip three times. The third turnip gets lodged in Wingo's beak. Wingo swallows it and becomes too bloated to fly, falling to his defeat. He also appears bloated during the end credits.