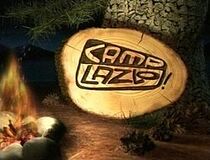 Camp Lazlo is an American animated series created for Cartoon Network by Joe Murray, released in 2005. It follows the adventures of Lazlo, a monkey Bean Scout at Camp Kidney during the summer. He has fun with his friends Raj and Clam, but is sometimes at odds with the other campers and Scoutmaster Lumpus.

Lumpus becomes bloated after eating his fill at a diner.

After learning he ate poisonous cheese, Lumpus eats Noregein Puffer Fish, which he is highly allergic to. After he eats them, he bloats up.

Edward becomes bloated after drinking a bunch of soda while teaching Lazlo how to burp.

When Scoutmaster Lumpus thinks he is underweight, he tries to find something to fatten him up. He finds a fat rare bird, but it ends up eating him and Lazlo. At the end of the episode, the bird fattens up Lumpus by feeding him worms.

When Edward loses a drinking contest with Lazlo, he seeks revenge, by not letting Lazlo use the restroom. This makes Lazlo bloated for the first half of the episode.

Lumpus loves meat. In a scene, Lumpus is at a meat steakhouse where he is suppose to eat a big meat for helping Lazlo. As he eats the meat one by one, he gains weight while struggling to eat the last pieces. He then explodes for eating the last piece of meat, but he still kept his weight.