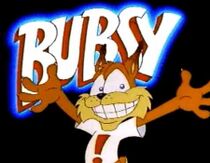 Bubsy is a pilot for an animated series based on the video game Bubsy in Claws Encounters of the Furred Kind, released in 1993 and created by Calico Creations, the production company behind Mr. Bogus. It was never made into a series due to negative reception and weak ratings.

Bubsy tries to calm down Arnold the Armadillo when he is first seen by inflating him by the tail.