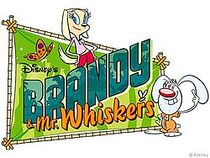 Brandy & Mr. Whiskers is an American TV series that ran from 2004 to 2006, with reruns airing until 2010. The titular characters are a snobbish dog and a hyperactive rabbit who end up stuck together in the Amazon Rainforest.

A crocodile is seen with a belly by a river.

Mr. Whiskers eats a huge piece of steak and plops his belly on the table.

Mr. Whiskers swallows a trail of eggs Brandy left to make him believe in the Easter Bunny again.

Mr. Whiskers eats fruits and vegetables after confessing to the carnivores he lied about being a meat eater.

After believing he has been bitten by a frog that can make victims sleep for 50 years, Mr. Whiskers does a bucket list. One of them includes eating his weight in hot dogs.