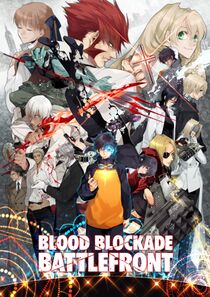 Blood Blockade Battlefront (known in Japan as Kekkai Sensen) is an anime adaptation of the manga series of the same name created by Yasuhiro Nightow. The anime was produced by Bones Inc. and the first season ran from April 2015 to the following October, while a second season (under the name: Blood Blockade Battlefront & Beyond) aired from October 2017 to the following December.

Zapp indulges on fried chicken and remains bloated throughout most of the episode.