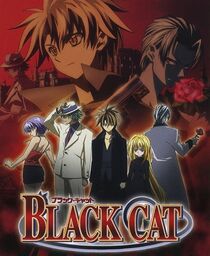 Black Cat is a manga and anime series first created by Kentaro Yabuki, running from the early to the mid-2000s. Former assassin Train Heartnet and his partner Sven Vollfied are a pair of bounty hunters, also known as "Sweepers". Trying to live carefree, Train's history in the organization Chronos catches up with him. His former partner, Creed Diskenth, plans to overthrow Chronos with his own group and take over the world with Train on his side. Train and Sven, along with cat burglar Rinslet Walker and bioweapon Eve, end up involved with a global issue increasing in scale.