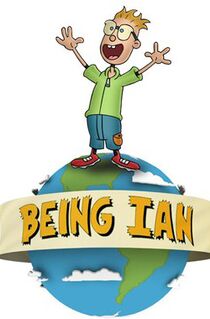 Being Ian is a Canadian animated series created by Ian James Corlett that originally ran on YTV from 2005 to late 2008. It centers around the antics of Ian Kelly, named after and based on the creator and his life at the age of 12.

During fitness, Sandi has filled her locker with piles of chocolates. She grabs a few bags but all of them fall out, so she eats enough chocolates to look bloated. Tyrone sees what has happened, so Sandi passes some of the chocolates over to him and he ends up bloated as well.

When the Kelley family heads to the beach, Kyle and Korey are shown snacking on various foods. They are then shown bloated as well.