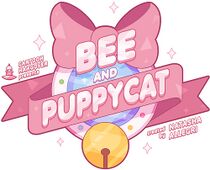 Bee and PuppyCat is a web series created by Natashi Allegri and produced by Frederator Studios. Originally a two-part short on Too Cool! Cartoons, it became popular enough that it was funded for more episodes. It also has comics published by KaBoom! Studios. The series focuses on a young, unemployed woman named Bee who meets a mysterious creature called PuppyCat and takes him in. As a result, he brings her along to other worlds to perform temp work.

Bee and PuppyCat receive a strange goo that can transform itself into any food.