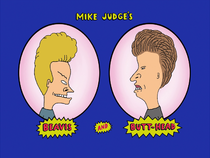 Beavis and Butt-head is an American animated series created by Mike Judge for MTV, originally broadcast from 1993 to 1997 with an eighth season released in 2011 only, though Judge has expressed interest in developing future episodes. Controversial within its first seasons, it has spawned video games, guest appearances by the characters themselves and a feature film.

The two title characters are absent-minded, perverted teenagers who live in Highland, Texas, and will spend their life causing havoc, ignoring their teacher and attempting to woo girls without success, often getting themselves into trouble.

The two stuff themselves with candy after blowing up the toilets to get free snacks.

Taking inspiration from Morgan Spurlock, Beavis and Butt-head eat nothing but Burger World fast food in 30 days in belief that it will make them popular, gaining weight overtime.