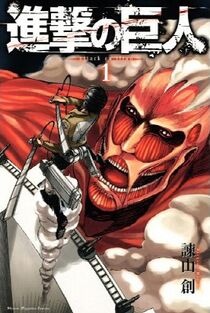 Attack on Titan (Shingeki no Kyojin) is a manga series created by Hajime Isayama that originally ran in Kodansha's Bessatsu Shōnen Magazine in September 2009. It has been adapted into light novels and an anime series. Video games and a live action film were also created.

In a world where man-eating giants known as Titans roam, the remainder of humanity lives in a city with massive walls to keep them safe. One day, the Titans break through the outer wall and wreak havoc. Three of the survivors are Eren Yeager, Mikasa Ackerman, and Armin Arlert. They later join the Survey Corps, a military group that fights against the Titans and aims to defeat them once and for all.

After Eren is eaten by a Titan, he transforms into another Titan inside its stomach.