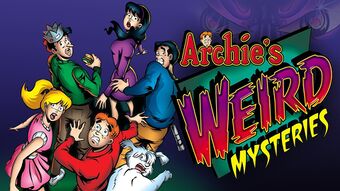 Archie’s Weird Mysteries is an American animated cartoon series based on the Archie comic series. Produced by DIC Entertainment and Les Studios Tex, the show briefly ran with 40 episodes spanning a single season from October 1999 to February 2000. Set in a slightly more radical tone than the comics, the show features the iconic cast of characters encountering various monsters, creatures, and other forms paranormal activity.

When the mutated blob of tapioca attacks Pop’s Chock'Lit Shoppe, Jughead attempts to fend it off by eating it, but it soon proves to be too much for him to eat.