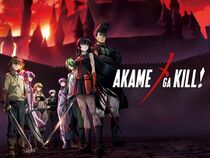 Akame ga Kill! is a manga series that started running in 2010, written by Takahiro with illustrations by Tetsuya Tashiro. There is also a prequel manga titled Akame ga Kill! Zero. An anime adaptation premiered in July 2014. A fighter named Tatsumi heads to the Capital to earn money for his village. However, corruption abounds from the Prime Minister controlling the Emperor. Tatsumi is almost a victim of this, but is rescued and recruited by Night Raid, an assassin group that tries to eliminate corruption by killing those responsible.