Adventures of Sonic the Hedgehog 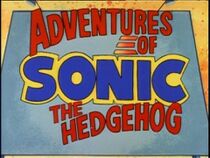 Adventures of Sonic the Hedgehog is a syndicated cartoon spin-off series of the Sonic the Hedgehog video game franchise from Sega, produced by DiC Entertainment and Bohbot Communications. It aired with 65 episodes in the course of just three months, starting from September 6th, 1993.

As opposed to its Saturday morning counterpart released two weeks later, Sonic the Hedgehog, it contains slapstick humor, making Sonic much more clever and skilled than Dr. Robotnik, who along with his three robot sidekicks is clumsy. Sonic has traits similar to Bugs Bunny; he would often disguise himself to fool his enemies.

An episode with a similar title and plot to the story in Sonic the Hedgehog #9, Sonic races a criminal lab rat named Lawrence until they end up in Poison Flower Valley, itching and swelling up. Tails takes them to a hospital and sets off to save Lawrence's parents, held captive by Robotnik who forced Lawrence to commit crimes in order to save them. Knowing that Tails is gone, Sonic goes to find Tails despite his new shape.

Since junk food can cause nightmares, Tails eats as much of it as possible to create a Junk Food Boogey Guy to scare away Robotnik's Boogey Man. When his Boogey Guy wins, Tails appears with a stuffed belly.

Tails eats dehydrated food and takes a drink of water, leading to him swelling up three times his size before Grounder accidentally de-ages him and Sonic with the Decrepitizer.